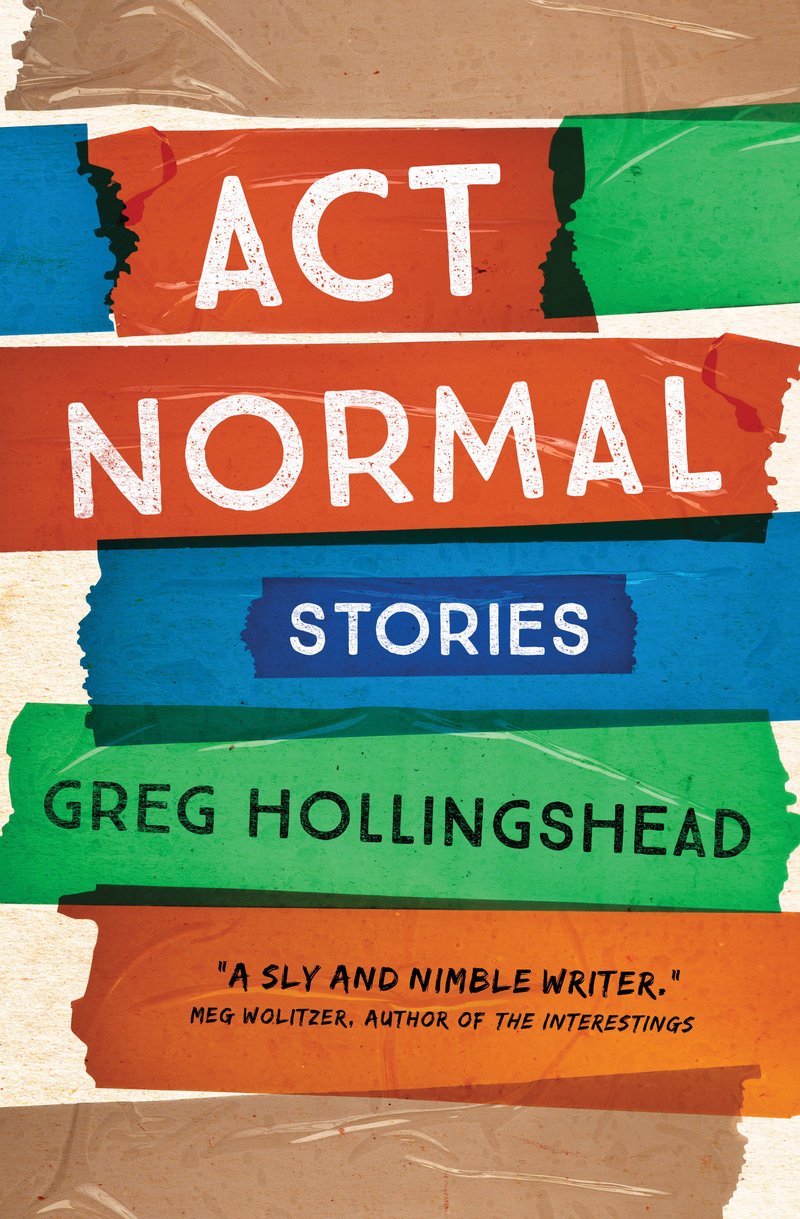 Act Normal, a new collection of twelve stories, appeared on the twentieth anniversary of the publication of Greg Hollinghead’s award-winning collection The Roaring Girl. These are contemporary stories about people doing their best to connect in a mad world. In “The Amazing Insult,” a blow to the head in a boating accident increases a woman’s intelligence and alters her sexual orientation. “The Retreat”: a man flees a rural meditation retreat for a highway bar. “Unbounded”: a woman has her fence taken down by a carpenter too depressed to build her a new one. “The Force of the World”: a boy discovers more than he is ready to know at the site of the family’s flooded vacation trailer. “Night Dreams of the Wise”: a man sleeping with the wife of the British defence secretary learns to stop doing foolish things. “Miss Buffett”: a cleric is haunted by the revenant of a member of his diocese. “Sense of an Ending”: a woman has difficulty understanding her husband’s family. “The Drug-Friendly House”: a man attempts to befriend a woman whose house has been described by the neighbourhood association as “drug friendly.”  “Fist Fight at the Orgy”: a man goes on a picnic with his best friend’s lover, who is also the younger sister of the girl he himself was in love with as an adolescent.

Buy from House of Anansi
Buy from Amazon

“Nothing normal here — twelve stunning new stories by the great Greg Hollingshead that will knock you upside the heart and break your head — flush with dizzyingly brilliant insights into the contemporary dilemma, every line is cast in existential magic. Here’s a fully-dilated peek into the secret lives of men and women on the brink.”
—Lee Henderson

“The stories of Greg Hollingshead are utterly unique, utterly strange, and utterly exhilarating in their offbeat, offhand brilliance. There is no writer like him in Canada.”
—Lynn Coady

“Greg Hollingshead is a sly and nimble writer. He has great range, but even more than that he has access to great feeling, which is evident throughout this surprising and exciting new collection of stories.”
—Meg Wolitzer

“Reading this book is like entering an apparently normal, well-built house only to find that it has left the ground and is now floating. Funny, smart, amazingly unpredictable stories by one of this country’s finest writers.”
—Gil Adamson

“Every sentence in Act Normal is a surprise. In fact, the stories are the sentences, each one veering into the next shock, until you’re far from the expected territory… I found myself rereading every paragraph, amazed, not wanting to leave behind a single word.”
—Tamas Dobozy

“Act Normal [is] a refreshing reminder of [Hollingshead’s] idiosyncratic take on the [short story] form. Few other writers represent the confusion of modern life in a way that is as individual, light, and succinct.”
—Quill and Quire

“[T]he effect is a kind of pleasurable incitement, which is why, instead of doing my readerly (and reviewerly) duty and moving to the next story…. I often found myself rereading, with far greater attention, the one I just finished. [In] ‘Sense of an Ending’ [Hollingshead writes of the clients of a social worker,] ‘Fiction had taught them an impossible point of view, which they had no right to, which was not in their best interest.’ Is Hollingshead referring to his own work or to the presumably more conventional fiction the family reads? Like many things in this fiendishly good Schrödinger’s-cat-of-a-book, it’s likely both. Or maybe it’s neither.”
—The Toronto Star

“Hollingshead’s preferred tone is not one of dread, but of laughter. These are comic stories, and much of the weirdness is in the service of tossing a spotlight on the absurdity of modern life. [Both Clarice Lispector and Hollingshead] demand to be read slowly and carefully, and they each refuse to provide pat morals or simple answers to the questions their stories raise. ‘It doesn’t take much to leave the rails,’ Hollingshead writes, ‘…but once you do, it’s all uncharted territory.’ These two writers understand this principle, and embed it into their stories on a granular level.”
—The Globe and Mail

“Some opening lines…appear to invite us into staid Canadian literary territory…. A page further in, though, plots have accelerated and taken not one but a few strange—and exhilarating—turns. Where they’ll wind up is anyone’s guess…. Just when you might think you’ve got a handle on his intellectually stimulating, satire-flecked, and inventive pieces, he reveals another facet.”
—Georgia Straight

“Mining his astute observational skills, Hollingshead writes with a clear-eyed awareness of the human foibles that can make a mess of the world.”
—Now Toronto Magazine

“Hollingshead’s short stories reflect the dialogue and deeds of people who are jarringly real in their peculiarities.”
—The Winnipeg Free Press

“Reader, tread carefully and look to your footing.”
—National Post

Buy from House of Anansi
Buy from Amazon
Page load link
This website may use cookies and third party services to track visits anonymously. OK
Go to Top